My name is Ivana Raymonda van der Veen: a singer-songwriter from the Netherlands with over 112,000 Subscribers on YouTube. I produced my first music video at the age of 14 and have been going ever since. Thanks to generous patrons, loyal fans and talented creative collaborators, this has been my full-time job for a decade now.

To date, I’ve released over 135 original songs, at least 18 of which I have completely self-written and produced, the rest being the work of composers from around the world with whom I regularly co-write. Such originals now fill no less than 6 released CDs: Dreams (2014), Timeless (2015), Reality (2016), Different (2017), Emotional Moments (2018) and For You (2019), along with 2 vinyl LPs, 1 DVD and 2 Blu-rays featuring the music videos. Further I’ve released more than 100 cover songs.

In 2010 I made my radio debut, in 2011 I gave my first big live performance and made my first appearance on Israeli TV. In 2012 I was lucky enough to be invited to perform in London, and in 2013 I sang in my first movie, before taking first place in a competition on ArtistSignal, winning a $10,000 grand prize, and receiving my first printed review in Washington D.C. By 2015 my viewership had expanded to viral levels and I made a further TV appearance. In 2016 I was thrilled to reach #1 on the iTunes Pop chart in Ecuador with “You Don’t Own Me”.

Throughout this time, I’ve maintained my own website (www.ivanavanderveen.com) and social media sites, enabling me to keep in touch with faithful fans and sweet supporters from all around the globe. My dream is to keep producing music videos for you to watch and I hope that they will brighten your day! 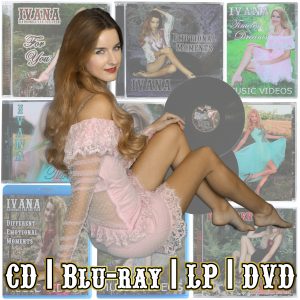